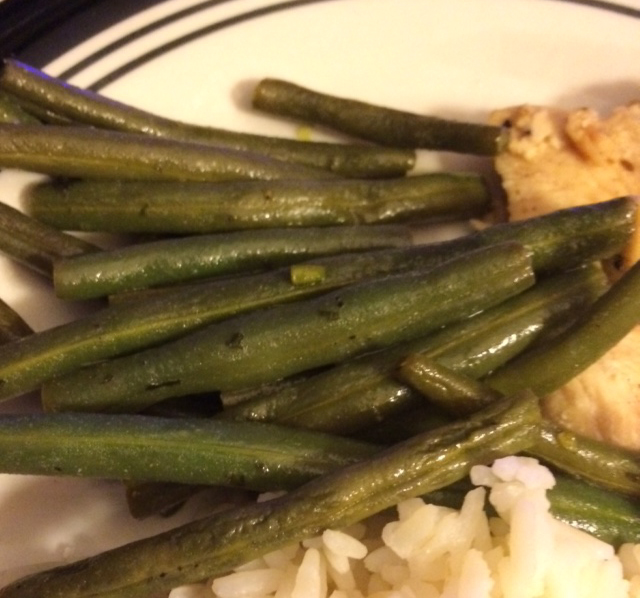 So I just got back from a wonderful weekend in Florida surprising my mom for her birthday (don’t worry, I’ll have a post on that soon). But in the mean time, I realized I haven’t had much time to share with you any of my recipes. So I shall get to blogging and start you back into the world of food with a really simple, really quick ranch green beans recipe.

I promise, it’s good. I’m not a green beans kind of gal and one of my girlfriends actually got me hooked on green beans because of this recipe.

In a medium saucepan, place green beans and a quarter cup of water. Heat skillet to medium heat, until water is simmering. Cover and cook until green beans are tender, about 8 minutes. Remove all but about a tablespoon of water, add 1/2 tablespoon of dry ranch dip mix into saucepan, stir, and cook for another two minutes. Green beans should be coated and water should be evaporated.

The Ultimate Anti-Kid Food, But Yum

I have recently found my newest favorite show on Netflix: Mob Wives. I don’t know if it’s the mob theme, the Italian-Americans, or the drama. I would love to go shopping with these ladies, though. Seemingly unlimited funds and they get to eat out all the time. My dream life, but take out the murdering families and all. Also, I’d prefer just a hair less drama in my life.

Anyway, after I was watching a few episodes, I headed to the supermarket to continue my new veggie friendly menu. I ended up grabbing some brussel sprouts – yes, you heard that right – to have with dinner. 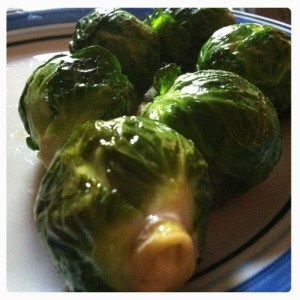 Preheat the oven to 350. I don’t usually cut the brussel sprouts in half, but it would probably cut down the cooking time. Toss the veggies in some olive oil, ground black pepper, salt, and garlic powder to coat. Bake for 35 minutes, or until cooked through. The outside will get a little crispy, and that’s probably the best part of this dish. 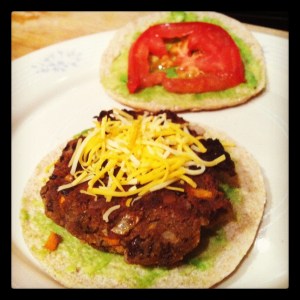 The other day I was hanging out with one of my friends and her response to what she wanted for dinner was, “black beans.” Yeah, not so thrilling. That was until we realized we could make black bean burgers, a feat that neither of us really thought we were capable of doing. It always seemed like one of those incredibly difficult things to do, putting together a bunch of non-meat items to create a healthy version of something. Oddly enough, we learned (via a quick Google search) that making black bean burgers was easy. Making a few little tweaks, this is what we came up with. 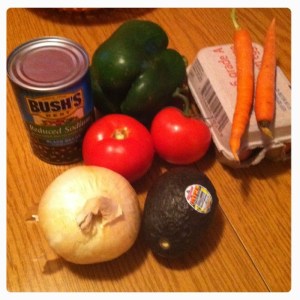 (The tomato and avocado were used for toppings on the Arnold’s flatbreads we used as bread.)

To start, we drained and rinsed the black beans. I then peeled the carrots, continuing to use the peeler to make long strips of the carrot. I then diced that a bit so they weren’t so long. Diced up the half a green pepper and half the onion. Then add the egg. 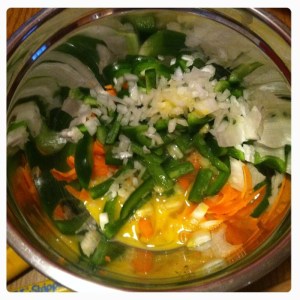 Threw all that in the bowl and then had my friend, Jess, mash up the black beans. 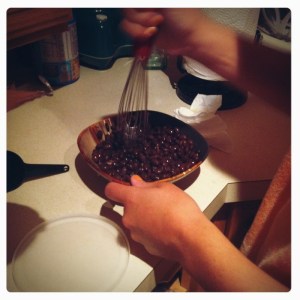 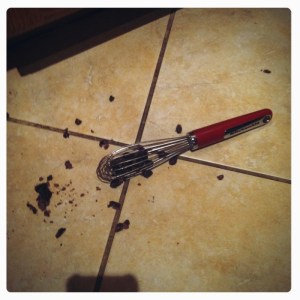 Let’s just say she was pulled off her black bean smashing job. But she was almost done, so we just threw that into the bowl with the bread crumbs and seasonings. Mashed all that up by hand and formed it into patties, then put it into the frying pan with some olive oil. 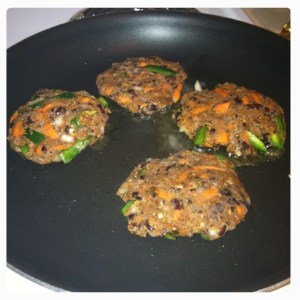 Cooked on both sides for about five minutes a side, or until crispy. 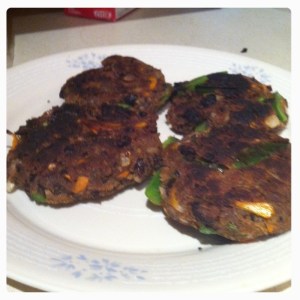 I think at this point, we were drooling. I know mine almost didn’t make it to the bun. We ended up making six burgers with all of this, and if our calculations are correct (or nearly close), we think they’re under 100 calories each (before bun, avocado and the tomato). Anyone else who wants to do the math, let me know. I’d be thrilled to have a better estimate. And I might have to make these a few more times. Like a burger, but better! Yum! 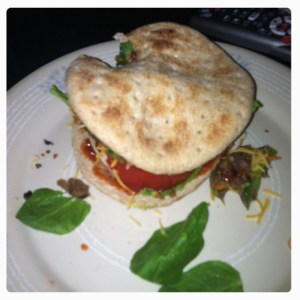