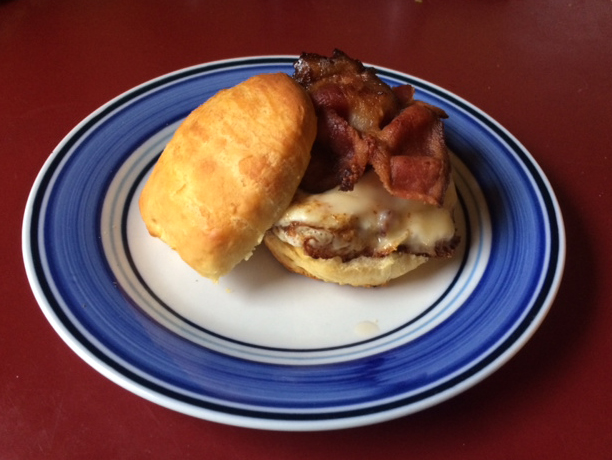 About a week ago I bought a container of Pillsbury mini biscuits. It was probably because the adorable little can seemed so out of place around its larger brothers and sisters. I took pity on it and thought I would make something out of the biscuits. Turns out I don’t eat a lot of biscuits, so incorporating them into my daily meals was a bit harder than it should have been. I always forget they’re sitting there in the fridge, and by the time I notice, I’m halfway through cooking something.

So when I started to make my breakfast the other morning, I stopped myself before I grabbed anything and preheated the oven. I popped a piece of bacon in a pan, then cooked up an egg and topped it with some American cheese. Slid it between a freshly baked, warm biscuit and felt quite accomplished with myself. McDonald’s has nothing on me. Plus the smaller biscuits made me feel like I was having breakfast, not a banquet like the larger ones would have. Maybe I’ll start getting up early to make myself something filling. Wonder what other kinds of biscuit sandwiches I can come up with.

Bake biscuits as directed on the packaging. After baked, slice in half.

In a small pan, cook bacon on medium-high heat, flipping once during cooking. Cook until crispy and remove from pan, placing it on a paper towel to absorb excess fat.

Crack egg into pan with bacon grease. Cook until egg white is cooked through and no longer transparent. Flip egg to continue cooking yolk. Add a slice of American cheese. Egg will be browned. When cooked through, remove. and place on biscuit. Top with bacon. Enjoy.

From One to Horse – Bacon Ham Egg Scramble 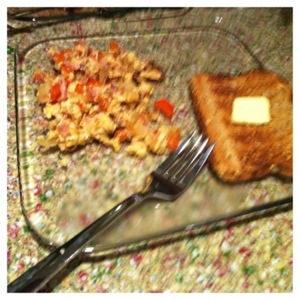 We went a little overboard with the breakfast scramble.

“How hungry are you, from one to horse?”

Yup, that’s how we were determining how much breakfast to make. If you’re wondering, I responded with “cat.” It seemed logical at the time, but we still ended up with too much food. I’m wondering what we would have made if I had said “horse.” I’m thinking we would have needed more than a quarter pound of bacon.

I also learned this morning about Epic Meal Time – an absurdly high-caloric online show. I’m not going to lie, I was half between disgusted and half wanted to eat the huge mounds of food they were making. It’s slightly ridiculous… okay, it’s absolutely ridiculous. I heard there may be an epic meal night in the future, and I’ll tell you, I’m terrified.

On that note, we made a less than heart-attack-inducing breakfast. Started by prepping the veggies -diced one whole red pepper and a small sweet onion. 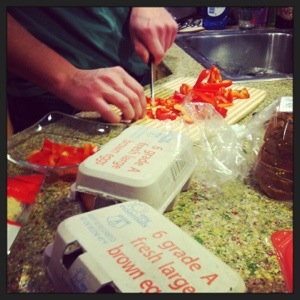 Rule one, find a sous chef to prepare all the vegetables.

I also may have gone a little off my regular meal plan when we opted to cook the veggies in bacon grease, but seriously, who is going to say no to bacon? It’s bacon! First cooked up a quarter pound of bacon and drained most of the grease from the pan, but left enough to saute the onions and red pepper. I also added about a teaspoon of ground black pepper. Probably could have added more. 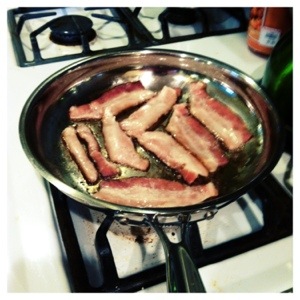 Cook up bacon, because it’s good.

Cooked down the veggies, trying to carmelize them. That took about 8 minutes. Then we added some diced up ham, I think it was three thin slices. Gave that a bit of a a cook through and added back the bacon into the pan. Then came the eggs. Tried to be healthy with only putting egg whites in for half the eggs and keeping the rest whole. Topped it with a handful of shredded “fancy” cheese and we had ourselves a mini epic meal.

Ended up with a handful of pictures from the morning chaos: 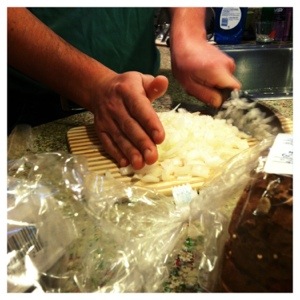 Chopped up way too much onion for the scramble. 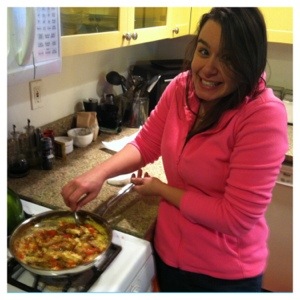 Oh hey, just ignore the unwashed hair and ridiculous grin. I was having too much fun. 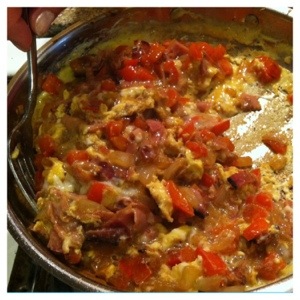 So much goodness in one pan.

Cook bacon until crispy. Remove from pan and drain almost all of the bacon fat, leaving enough to saute vegetables. Cook onions and red peppers down until carmelized. Add ham until heated through. Add back in bacon, as well as all the eggs. Add pepper to taste and cook scramble. At the end, fold in cheese. Serve. 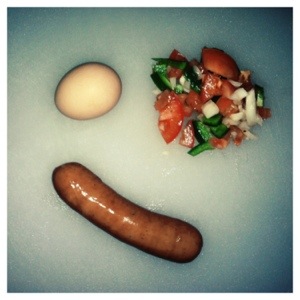 A quarter cup of fresh salsa, chicken sausage link, and one egg.

I have to admit, sometimes I just like having breakfast for dinner. I dream of waffles, omelettes, and bacon. Okay, bacon is okay all hours of the day, but I still like to cook some up in the morning. The fresh smell of bacon and maple syrup filling the house is a glorious, glorious thing. I think most of you will agree.

So pairing up my love for breakfast with my new diet helped me whip up this plate. I’m not cutting out carbs, just trying to monitor the amount I’m eating and replacing my usual bread and crackers with veggies and protein. Protein fills me up and keeps me full.

So I sauteed a  quarter cup of fresh salsa. That’s just diced sweet onions, Roma tomatoes, and green peppers with a dash of ground black pepper, garlic powder, and cayenne. I then added in some diced chicken sausage. The kind I bought was the new Johnsonville chicken sausage with apple flavor. It’s sweet, but not too bad.

Once that’s browned up, you can either deglaze the pan with a little less than a quarter cup of pink moscato wine, or put the egg in now. If you deglaze, make sure you cook off the alcohol before adding the egg in. Cook it through and you’re done. Just enough sweet and savory to satisfy a breakfast for dinner craving. 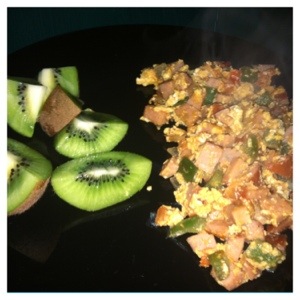 Threw in the kiwi for some color and vitamins.

I had about four minutes to get out of the house this morning. I thought, oh hey, I can totally make myself breakfast,. And then I realized I wouldn’t be able to inhale a bowl of Cheerios or make myself waffles in time to get out of the door. (No, I don’t eat frozen waffles. I have a waffle maker!!) So I checked the fridge real quick and thanked the gods (you know, like Paula Deen and Giada de Laurentiis) that I had some eggs in the fridge and some tortillas (almost always on hand). Brilliance struck! I kinda was hoping for lightning for something, but i’m not that cool. Quick eggs! 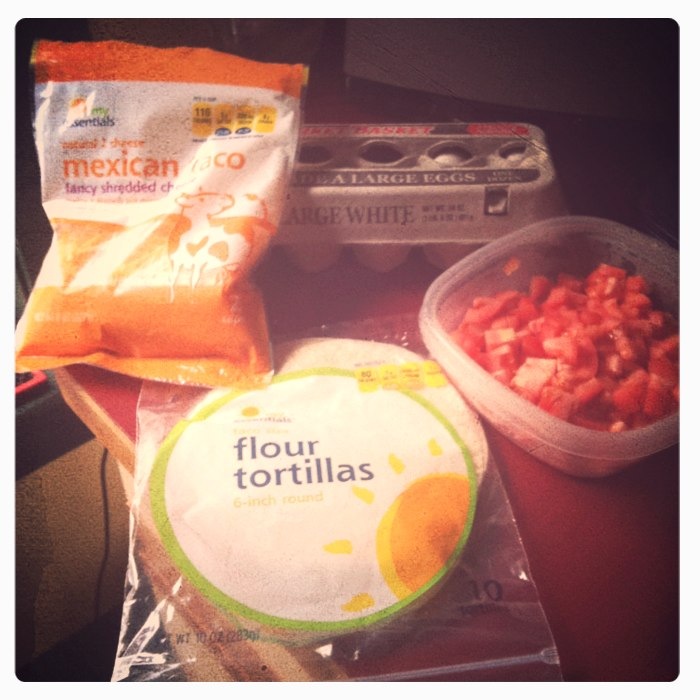 Then pulled out my handy mini egg frying pan

. It’s probably one of the best cooking items I’ve ever purchased. I poked the yolk so it would cook faster.

Microwaved the tortilla during this time for 10 seconds to loosen it up, then placed some cheese and fresh tomatoes on the tortilla. The waiting (not long) for the egg began.

Rolled up that baby and tossed some hot sauce on it. I was ready to eat that thing up!

See, it’s perfect for on the go, too! Don’t worry, I wasn’t eating and driving, just took the picture in the car before I gobbled it up. 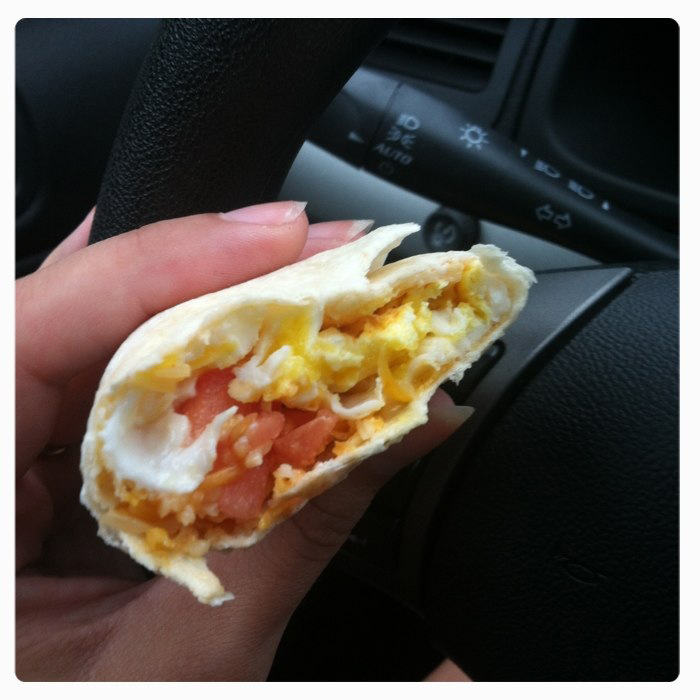