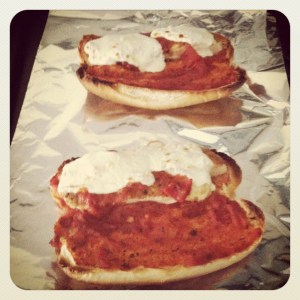 The intent was not to be impressive. But impress I did. Let me back up a bit. I love chicken Parmesan. I love it so much that I’ve been making it since I was old enough to reach the stove (the first few times were under the skilled eye of my mother until she realized I wouldn’t burn the house down). So when I was watching television with a friend recently and they were showing some dive that sells chicken parm sandwiches, I was like, “hey, I could totally do that.” I mean really, you’re swapping out pasta for bread.

My friend, however, has this notion that making chicken parm is some sort of old secret that takes days to make. Like it’s some labored over meal that only 4-foot tall Italian grandmothers wearing sauce stained aprons can make. Let me set the record straight. I may not be the aforementioned cook, but I can still cook up a food coma worthy meal – and all with half the time. Believe me, you can make this.  I’ll even share my secrets.

Cut the chicken in half length ways so you end up with four pieces. Dredge in a beaten egg and then coat with the 4C bread crumbs (I tend to toss a bit of cayenne pepper, black pepper, and garlic powder in as well). 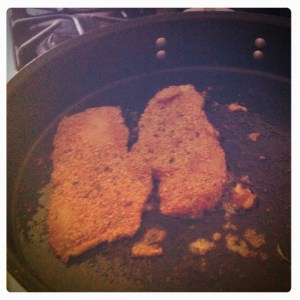 Fry in a skillet with a thin layer of olive oil until cooked through. Remove from the heat and place on paper towels to get rid of some of the grease. Believe me, you’ll thank me later. I love olive oil, but there is something about a soggy, oil-infused chicken breast that I just can’t stand. And here comes my favorite part: the mozzarella. 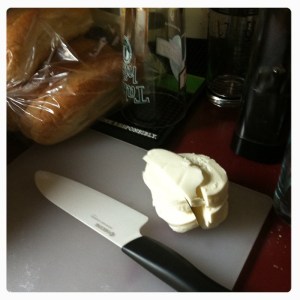 I don’t know if it was that I was bread on mozzarella sticks, or that I have a secret crush on pizza. Either way, every time I buy mozzarella, I know I should expect about half of it to be eaten (by me) before it ever touches the food I’m cooking. It’s delicious. As an appetizer with a bit of fresh Roma tomato and some herbs. I die, it’s so good.

But back to dinner. Cut the mozzarella into thin (maybe quarter inch thick) pieces.

Cut the rolls open, lay them on the cooking sheet and spread a layer of pasta sauce on the bread. Place your chicken on top, another dabble of sauce, and then two piece of that mozzarella on top. You should have something that looks like this:I broil it on low for about six minutes (but it depends on your stove). Just so that the cheese gets a little brown and the bread is toasted. Pull it out, let it cool, and serve it up. I think it took longer for us to go to the grocery store and get everything than to make it. I have successfully convinced my friend that yes, in fact, you can make a fabulous meal in less than an hour. (Total was probably about 45 minutes, including time to open beers, put on the A/C, and find the baking sheet.)

I know this isn’t some miraculous dish that I just served up, but it’s one of the most crowd pleasing things to make, and it’s quite easy to make everyone feel like you spent hours slaving over the stove to make it. Just tell them you made the sauce yourself. How will they ever know?