Okay, so stromboli is not just for birthdays. It just so happens that my mom and I used to make it a lot and I thought, for her birthday, that it might be nice to make it for her again. I may have traveled 1,300 miles to celebrate with her. Anyway, back to the stromboli. Unlike a calzone, I do NOT put pizza sauce in, nor do I put tomato in it at all. Sooo, with that said, I opted to make my famed stromboli. nom nom 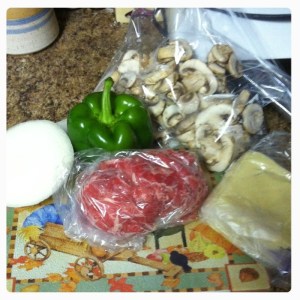 First of all, you must get the oven preheated to 350. While that’s getting all nice and toasty, get a frying pan going with some olive oil. In that, cook up some diced green pepper and slices of onion. Cook it through on medium until the onion is cooked through. I added a half pound of the shaved beef to the pan and kicked up the heat a hair to get the pan hot.

While I had been handed a glass of Moscato wine (that’s a sweet white wine), before I took a sip, I may have dropped a few drops into the pan to keep the meat moist. When that cooked off a bit, I was dropping in the mushrooms. Cooked those through. 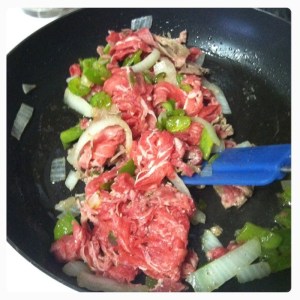 Cookin’ up some goodness.

Then I went looking for a rolling pin to roll out the dough. But, being at my mom’s house, a normal rolling pin wouldn’t exactly be found in her kitchen. So I found this random beauty in a drawer… 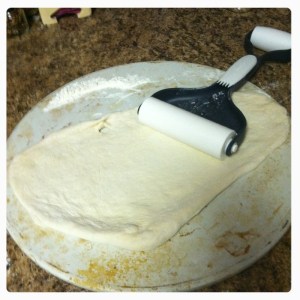 What kind of rolling pin is this??

It looks like some sort of weird futuristic kitchen device. Why do you need two ends to a rolling thingy?

Anyway, I layered on some American cheese and then started scooping on the filling. 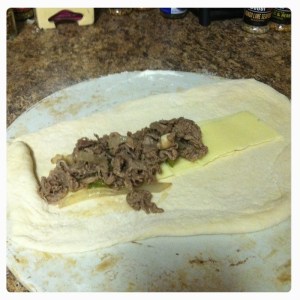 I may have gone overboard and overfilled it, but I pulled the dough over and then cut a few little holes in the top of the dough to let it breathe. Bake for 25 minutes or until the top is browned. 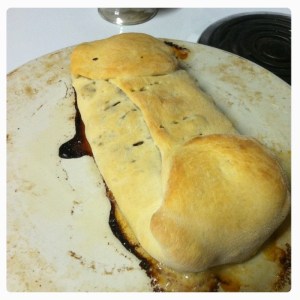 Will be super hot when it comes out. As much as you want to eat it now, let it cool for 8 minutes. 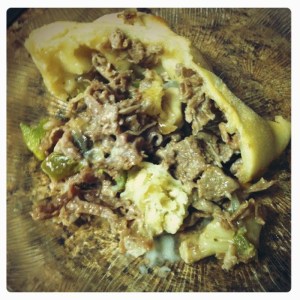 I wanted to eat the whole thing myself. That’s probably a bad idea.